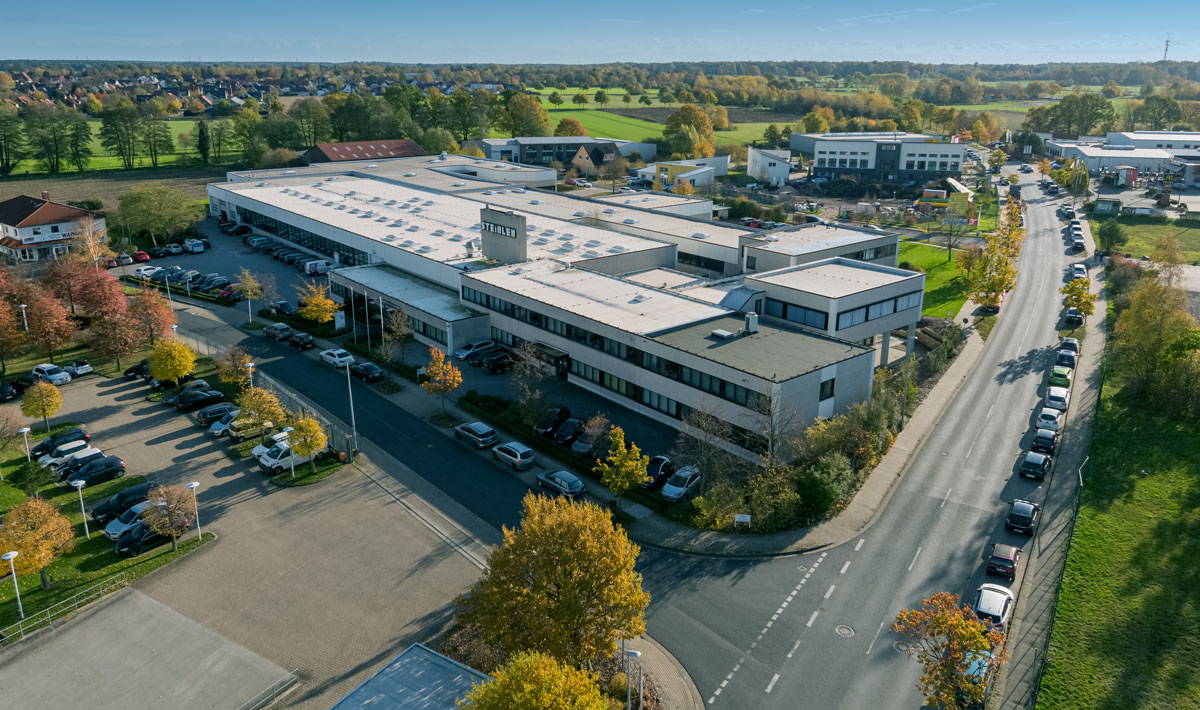 From Crafts Enterprise to Partner of Industries

Steinlen Elektromaschinenbau GmbH and its predecessors were founded more than 100 years ago. During the early years, it was unimaginable that one day more than 5,000 customers around the world were serviced on a regular basis.

For over a century, growth phases have been an integral part of business processes. The company had to move five times - and each time an investment was made for an even larger company building. New machines were purchased, the warehouse was expanded and the number of employees grew steadily. This was a necessary action to keep up with the expansion of the trade, license and service program. The goal is and always has been the effective organization of operational processes and, above all, the satisfaction of our customers.

Despite the clear industrial orientation, one valued tradition of craftsmanship has been maintained: As one of the oldest specialist guild companies for electrical engineering in Germany, we support young people during their training at Steinlen. On average, 18 apprentices who are being trained as electronic engineers for machines and drive technology or as clerks for office management work at the Burgwedel site. The highest scoring graduate of the country has often been trained at Steinlen. Steinlen has also received an award from the Lower Saxony Ministry of Education for our extraordinarily reliable training.

The small armature winding company was founded in 1905 in Hanover-Linden / Weberstrasse by master electrician Karl Schäfer. At first the company dealt with installations of electrical light and power systems, new and wrapping of armatures and coils of all makes, the construction of collectors, resistors, controllers, switchboards of all sizes and stocked carbon and copper brushes.

At that time, the profession of electrical machine builder did not even exist yet, it was only created in 1934 as an independent profession in the electrical trade.

The anchor winding company moved several times within Hannover-Linden: 1917 it was located in Deisterstrasse and 1922 it moved to Wittekindstrasse. 1936 Kurt Schäfer (son of the founder) took over the business.

1941 the company was transferred to Dornhöfer GmbH, which incorporated it as a branch in the main business in Mainz and appointed engineer Otto Schnarr as head of the branch. In September 1943, the electrical machine builder Friedrich Pape became a concession holder for the next almost 30 years (until 1970). He was active on the journeyman's and examination committee of the electrical guild in Hanover and has made a great contribution to the specialist group for electrical engineering.

On December 8th 1945 the branch in Hanover-Linden was registered as an independent GmbH. Ing. Otto Schnarr took over the company on January 1st, 1954 and continued to operate it under the name Otto Schnarr Elektromaschinenbau GmbH, formerly Dornhöfer GmbH.

In 1955 the company became an authorized workshop of Eberhard Bauer GmbH, Esslingen / Neckar, which was the first company at the time to have a production line for the series production of geared motors and had just expanded to many locations.

1960 : the Otto Schnarr GmbH was converted into a limited partnership with an entry in the Hanover Commercial Register and in 1966 moved to Hanover-Empelde, Häkenstr. 7, where an abandoned farm had been leased and converted for the purpose of the company. 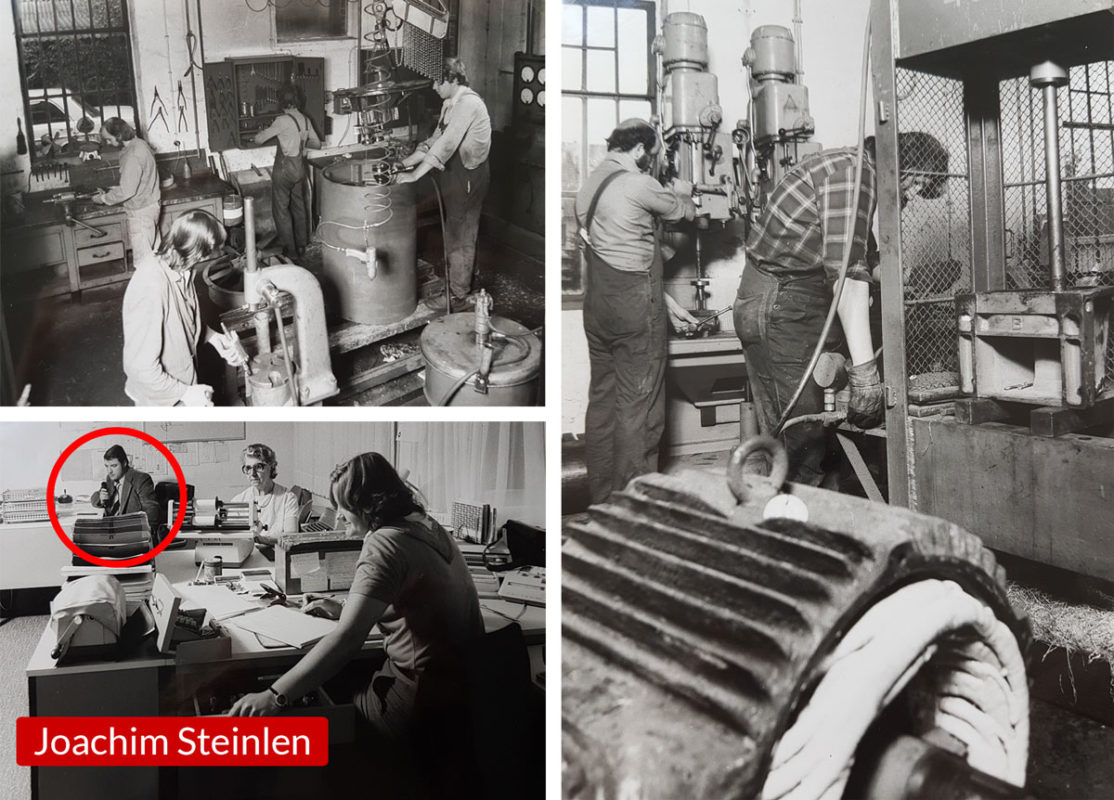 On January 1st, 1971 Joachim Steinlen took over the company and operated it under the name Otto Schnarr, owner El.-Ing. (grad.) Joachim Steinlen. Shortly afterwards, the business activity was expanded to include the sale of electric drives and spare parts, and once again the previous operating rooms were no longer sufficient.

Mr. Steinlen found new, better suited business premises in Großburgwedel. The building, which had originally been used as a car workshop, was quite suitable for an electrical engineering company. Various conversions and new construction followed in order to maximize the use of the building and it's surrounding area.

On April 14th, 1975, the gear locksmith's shop was relocated from Hanover-Empelde to Großburgwedel. In 1977 the anchor winding company and the rest of the company followed. Of course, the inauguration of the new premises was celebrated with numerous guests at the beginning of September 1977.

On January 1st, 1979 the sole proprietorship was converted back into a GmbH and has been operating as STEINLEN Elektromaschinenbau GmbH ever since. The company was growing continuously and had been expanded to an area of 2,000 square meters.

In 1980 the company employed a total of 35 people. Furthermore, Mr. Steinlen was not only celebrating his 30th anniversary with the company and 10 years of self-employment, but also looked back on 75 years of company history and 25 years of trusting cooperation with Bauer. The voluntary and honorary commitment of Mr. Steinlen in various associations such as the electrical guild, the LIV, ZVEH, the VDE and the EASA brought him special recognition and a widely respected reputation. 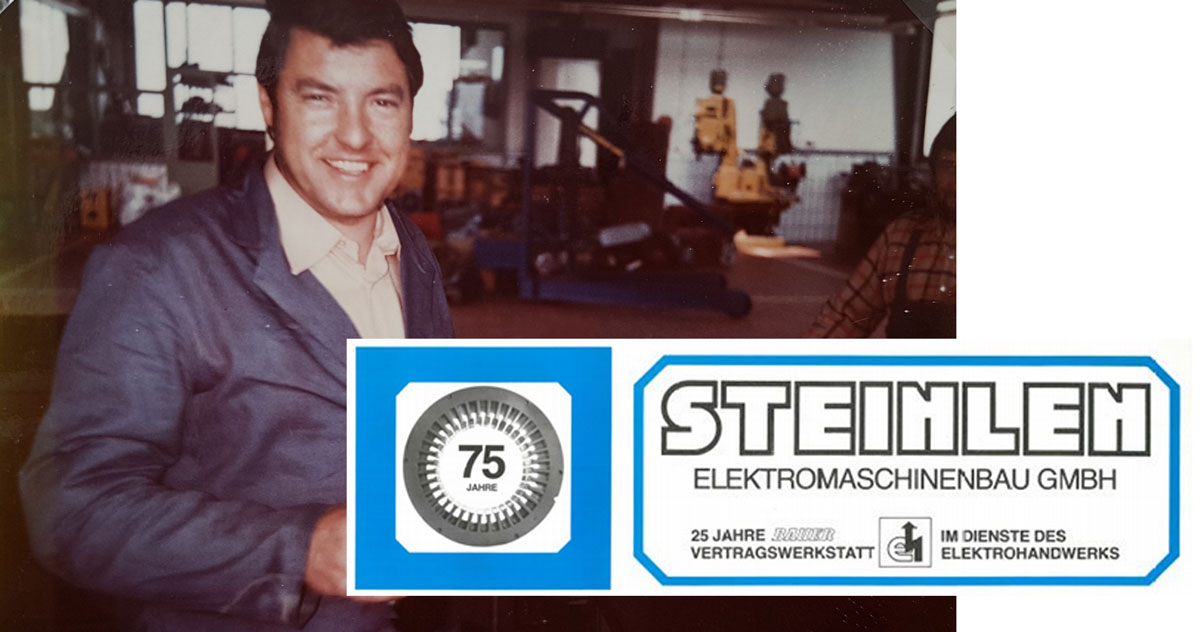 The trade, license and service program had been continuously built up and expanded since the 1980s. The product range became more diverse and the company established itself as a respected specialist company. Through fair, committed and trusting business practices, many partnerships have been formed, some of which have existed for several decades.

After almost 15 years, the Großburgwedeler company building in Berkhopstr. 12 reached the maximum amount of land development after many modifications and additions had been made throughout the years; the property was no longer able to accommodate further expansion and a new location had to be found for the company to be able to continue growing.

In 1993 the company moved into a new, significantly larger building at Ehlbeek 21. "We had to move from Berkhopstrasse to Ehlbeek 21," explained Mr. Steinlen at the time, "since we could not expand even one square meter." The new building, also located in Großburgwedel, was, with almost 4,000 square meters of operating space on a 9,000 square meter property, twice as large as the old one.

Not only were the employees happy about the modern and more comfortable workplaces, the warehouse was increased significantly and the production area was expanded. Furthermore, in the interests of environmental protection, a new carbon-active filter system (exhaust air treatment) and a wastewater treatment system were installed, which the municipality of Burgwedel highlighted as Steinlen's pioneering commitment in the environmental sector.

Mr. Steinlen was particularly proud of his employees, because the move took place with "man and mouse" in only 4 days - record time. "Urgent repairs were still being carried out on Friday, but we were already producing again on Monday."

The move was not the only highlight of the year though: a license production was agreed upon and a quality management system was introduced.

To celebrate the 90th anniversary of the company, Steinlen Elektromaschinenbau GmbH and its predecessors organized a big birthday event on September 15, 1995. Numerous loyal customers, suppliers and representatives of the Chamber of Crafts and Electronics Guild were invited and were treated to an exclusive tour of the company, demonstrations of workshop work, music and a buffet.

Even though the company building at Ehlbeek 21 had been designed to be spacious, it only took a few years for the first renovation and expansion work to start again. 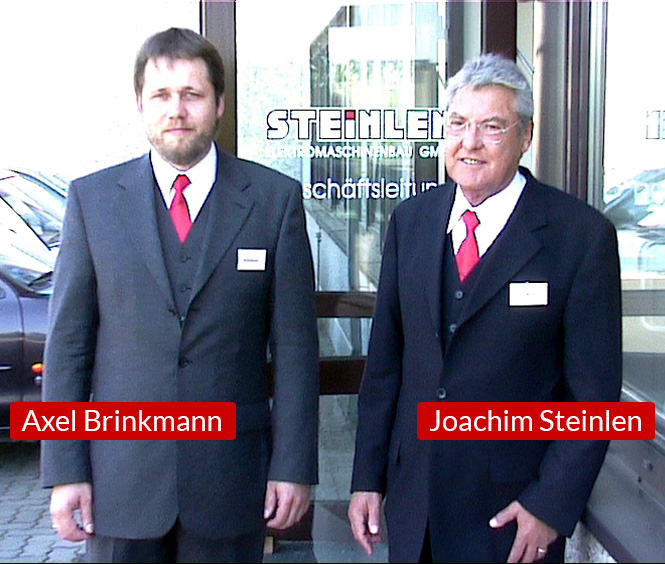 In 2000 Mr. Dipl.-Ing. Axel Brinkmann took over the management of Steinlen Elektromaschinenbau GmbH. Shortly thereafter, pioneering partner contracts for the company were signed. Steinlen became a Danfoss Drive Center and began licenced production of the Bauer G96 drive series and drum motors. The company's manpower had to be doubled to almost 100 employees within a very short time in order to meet the high customer demand.

The company grounds were expanded to a total of 5,600 square meters. 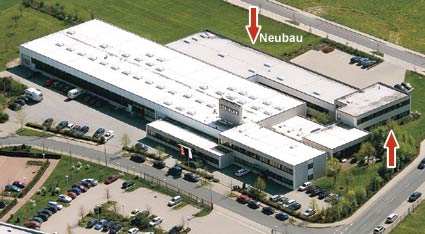 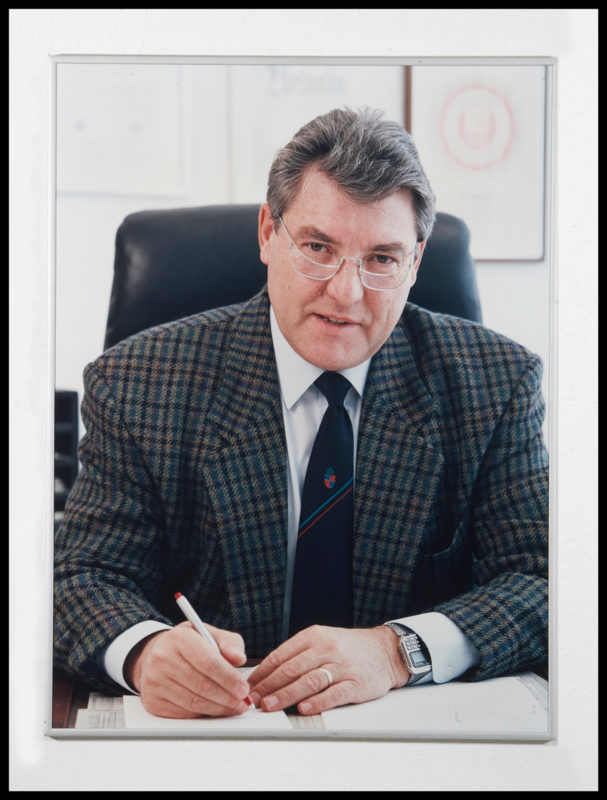 On November 21, 2003, the successful and visionary entrepreneur Joachim Steinlen died at the age of 69. For more than 32 years he has worked vigorously and tirelessly for the interests of the company. A high sense of responsibility and great expertise, coupled with open-minded people, were the basis for his extremely successful work.

The extraordinary and exemplary commitment to his profession was his passion and obligation at the same time, not only in many voluntary functions but also in the trade-political association work at state and federal level. This commitment extended beyond the borders of Germany to non-European countries. Through his contributions he was able to decisively shape and support the associations. He was able to inspire and deeply impress younger and older colleagues alike with his supreme ease. As an entrepreneur, his always open, friendly and obliging manner has earned him recognition and respect.

After the German reunification he looked after his colleagues in the new German federal states in an exemplary manner and supported them vigorously; the last time after the flood disaster of 2002.

The shareholders, management, the works council and the employees of Steinlen Elektromaschinenbau GmbH had to say goodbye with grief but also gratitude, to a great person, whose memory will be an obligation for everyone in the future. He will always be with us through his ideas and entrepreneurial vision.

To mark the 100th anniversary of the company, Steinlen Elektromaschinenbau GmbH and its predecessors were celebrating a big summer party on June 24, 2005 with numerous loyal customers, suppliers and representatives of the Chamber of Crafts and Electrical Guilds.

During the following years, the production program and the building were expanded again: 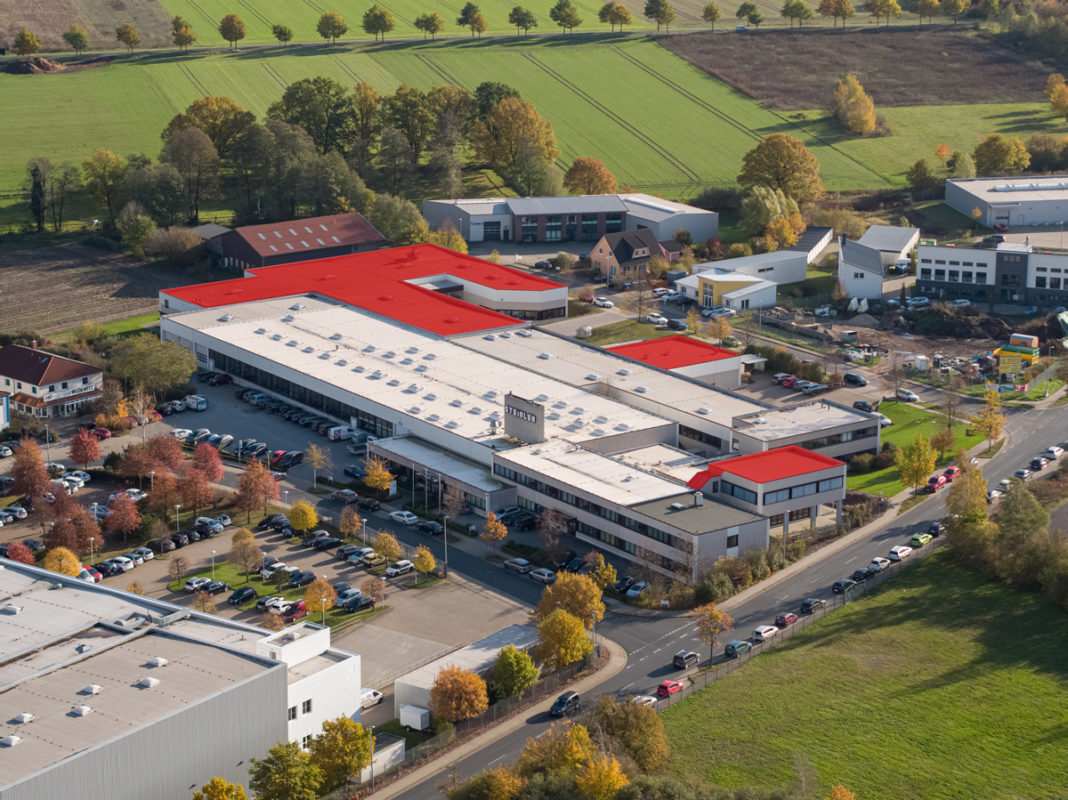 2018 : the expansion of the company building in Burgwedel was planned with an investment of several million euros. The production area was increased by 40%, and many new jobs were created. The takeover of a new production program including assembly, testing and storage went beyond the previously known production framework and therefore had to be completely redesigned. Nonetheless, production did not start with the new extension, as the managing director Mr. Brinkmann explained, "We are already starting to produce in the old stock".

The workshop area of the Jantzen branch in Bremerhaven was also doubled in size in 2018 (by 200 square meters) for one million euros.

Continuity and performance on one hand, good management and continuous adaptation to technical progress on the other: then and now, the outstanding characteristics of Steinlen.